We’ve put this article together to explain the major take-home points raised by the documentary, Seaspiracy.

In recent years, there have been a number of high-impact environmentalist documentaries designed to make us pause and re-think the actions of humans.

Documentaries such as Black Fish (2013) revealed the intelligence and human-like personalities of cetaceans, kept against their will and forced to perform in captive environments. Others such as What the Health (2017), endorsed by Leonardo DiCaprio, revealed the dark secrets of the food industry, and now the world has been rocked by Netflix’s latest contribution: Seaspiracy (2021), produced by the same film-makers behind Cowspiracy (2014).

What is Seaspiracy about?

The new documentary aims to document the “dark truth about the global fishing industry and its impact on our planet”.

Told from the perspective of a UK-based filmmaker with a passion for preserving ocean life, we follow his journey around the world and discover “alarming global corruption” associated with the commercial fishing industry, as well as further implications concerning commercial whaling, microplastics, and even human slavery.

Filmmaker Ali Tabrizi initially set out to celebrate all-things-ocean but what he uncovered challenged all notions of sustainability when it comes to fishing, and will likely shock anyone who cares about marine life.

The problem of plastic pollution

It can be difficult to understand the huge scale of the problem when it comes to plastic polluting our oceans and fresh waterways.

Based on research from a 2015 study, the documentary suggests that a truckload of plastic is dumped into the sea every single minute. This is on top of the 150 million tonnes which already pollute our oceans. A 2016 study suggested that there will be more plastic than fish in our oceans by 2050 if nothing is done to reduce the flow of plastics into our waterways.

Although there is growing awareness around environmental risk factors such as microplastics, there remain many misconceptions around the sources of plastic found in marine systems. In recent years, the media and anti-plastic campaigns have led a targeted approach to reducing our consumption of items such as plastic straws and cutlery, however Seaspiracy revealed that plastic straws only contribute around 0.03% of the plastic entering our oceans.

Instead, the leading source of plastic is by far the commercial fishing industry. In fact, 46% of the Great Pacific Garbage Patch is made up of discarded fishing nets and gear. This manner of pollution is far more deadly than our consumable plastic straws, as fishing nets and all manner of gear are specifically designed to kill marine life. 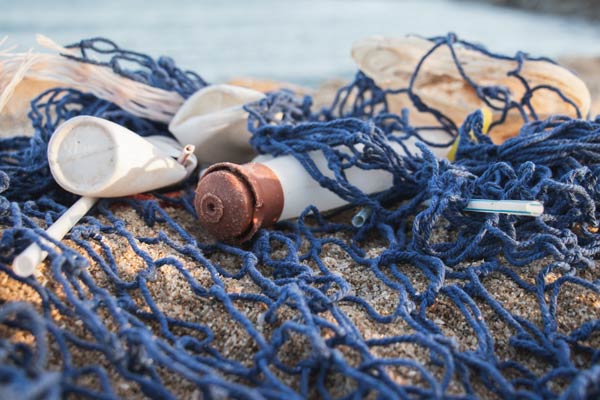 Even if no more plastic entered the ocean from this moment onwards, we would still be contributing to the eradication of marine habitats and ecosystems because of the destruction left in the wake of commercial fishing practices around the world.

The effects of commercial fishing

Commercial fishing depletes fish populations to such an extent that many species are on the brink of extinction.

Due to the complex and interdependent nature of marine ecosystems, the extinction of just one species can lead to the total collapse of all marine life. And it doesn’t stop there – some scientists suggest that if we continue to overfish our oceans at our current rate, we also condemn all terrestrial life on Earth.

Sylvia Earle, well-esteemed and widely celebrated marine conservationist, is the Founder of Mission Blue, an initiative which aims to raise awareness for the plight of our oceans. Earle famously stated, “No water, no life. No blue, no green”, and this statement rang loud and clear throughout Seaspiracy. Did you know that around 85% of the oxygen we breathe comes from our oceans? That’s much more than is provided by the Amazon rainforest.

Right now, 5 million fish are killed every single minute around the world; this equates to 2.7 trillion every year.

These figures are simply astounding, but when you really examine the process of commercial fishing you begin to realise why so many fish are slaughtered. When you eat fish, it isn’t just that particular fish that has been slaughtered for your meal. You must also factor in the ‘excess’ fish and marine mammals caught in the process – these organisms are known as ‘bycatch’ and can include whales, dolphins, sharks, seals and other fish species.

There are many regulations for reducing bycatch but with over 4.5 million commercial fishing vessels around the world, it’s incredibly difficult to monitor and govern.

Bycatch is the unintentional capture of fish or other marine species, which often occurs during commercial fishing processes.

Up to 10,000 dolphins are caught off the Atlantic coast in France every single year as bycatch, according to the Sea Shepherd conservation group. In total, over 300,000 whales and dolphins are killed every year as bycatch. The same goes for sea turtles, with 6 out of the 7 species of sea turtle now classed as threatened or endangered as a suspected result of commercial fishing.

We are currently killing between 11,000 and 30,000 sharks every hour, every single day. This is equivalent to 50 million sharks every year – half of which are killed through bycatch alone. Many species of shark have lost between 80 and 99% of their populations over the last few decades.

Overfishing is also contributing to the reduction of vital food sources for the apex predators of the seas – with many whales, dolphins and sharks (as well as sea birds) now struggling to find the food they need. It is estimated that seabird populations have declined by around 70% since 1950.

Is there such a thing as sustainable fishing?

Seaspiracy claims that it is very difficult for environment organisations to certify sustainable practices at sea. In the documentary, it is stated that “the brands you see being labelled as sustainable are often not sustainable in the way you think they are. For example, Sea Shepherd caught tuna fishing vessels which had slaughtered 45 dolphins to catch 8 tuna. That fishing vessel was working for a “dolphin safe” fishing company”.

This makes it difficult for consumers to make informed decisions when it comes to purchasing ‘sustainable’ food products. It also leads to distrust between the public and the conservation organisations which make these misleading claims.

There simply are not enough fish in the sea for sustainable fishing to exist on a global, commercial scale.

Human slavery in the fishing industry

The documentary also touches on the problem of human slavery in the commercial fishing industry, with a particular focus on the shrimp and prawn industry in Thailand. The filmmaker interviews a former fisherman who anonymously details the physical abuse, neglect, and imprisonment he experienced for a number of years aboard a commercial fishing vessel. It becomes clear that fish and other marine life are not the only ones suffering at the hands of the global fishing industry.

Fish are able to feel pain and can detect the smallest changes in their aquatic environment via their lateral line – a bundle of nerve cells which stretch down the sides of fish and allow them to swim in unison (forming large schools to avoid predation).

Studies have shown that fish are able to form memories, experience fear and even use tools to their advantage. They are able to work individually of their own accord or work as part of a team – even with other species – to find food.

Seaspiracy was a shocking but enlightening watch. It’s vital to remember that fish are farmed animals too; capable of experiencing pain, suffering and exploitation by humans. Although distressing to learn of the wide scale of the problem, it is more important now than ever before to change the way we interact with our planet. Remember – No water, no life. No blue, no green.

What can you do to help?