We care for all kinds of equines here at Goodheart, from gentle giants to energetic ponies. What’s the difference between a horse and a pony we hear you ask? For starters, pony breeds tend to be shorter and stockier than horses and have slightly different muscle and bone structures. Ponies also tend to be shrewder compared with horses, but this can often mean they’re more mischievous!

Meet some of our rescued equines

We care for all kinds of equines, from gentle giants to energetic ponies. Before our sanctuary had even opened its doors, we received a request to help with a young pony called Harry. Naturally, we couldn’t say no, and since then our group of equines has continues to grow.

Horse and pony care at Goodheart

Most of our horses come to us later in life, often after a career as riding or competition horses. All of them now enjoy retirement here at our sanctuary and receive the same individual care as the rest of our residents.

Horses have 10 muscles in each ear – compared to us humans having just 3 – and they can rotate each one 180° to listen without turning their head. Like vocalisations, ear movements are also an important part of equine communication.

Like pigs, equines use a range of different vocalisations to communicate with their animal and human friends. The most well-known is probably the “whinny” which is social sound designed to attract attention, but horses also use “nickering”, “snorting” and “squealing” sounds for a variety of purposes.

Horses thrive in social environments where they can interact with other individuals. They will groom each other in the form of licking to form strong bonds, as well as play fight, chase, and vocalise to each other!

Domesticated horses have a natural lifespan of between 25-30 years while ponies can live up to a staggering 35-40 years! In an industry like horse racing, a horse’s career will end after 2-3 years. After this, many are sold to slaughterhouses and their meat exported abroad, typically within Europe.

Although horses and ponies are highly regarded in the UK with many kept as beloved pets, equines are still exposed to mistreatment and exploitation on a daily basis, including:

Support our horses and ponies with a donation

We pride ourselves on providing a very high standard of care for all our animals here at Goodheart. Will you help us to care for them by making a donation today?

Meet some of our horses and ponies

Meet some of our friendly equines – from tiny Shetland Twinkle to our very first resident, Harry. 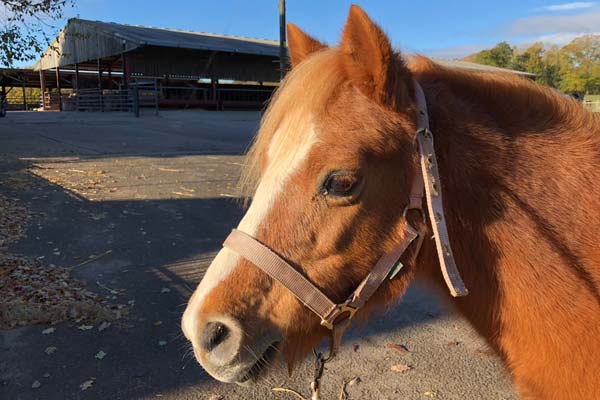 Poppy is a chestnut mare with a firey attitude to match her colouring! Her closest companion is Harry the Welsh cob, who is utterly besotted with Poppy and follows her around everywhere she goes.

Twinkle is a Shetland who arrived back in 2019 with her companion Morris the pony when their owners could no longer look after them. Both ponies are very friendly and now enjoy a peaceful retirement at our sanctuary.

Harry was the very first resident here at Goodheart, arriving at the sanctuary before it had officially opened its doors! Before he became a Goodheart resident, Harry lived with a group of travellers but kept escaping. Finally, his owners didn’t want him back anymore, and so he came to live permanently with us.

Click the button below to learn all about our latest habitat development project here at Goodheart Farm Animal Sanctuary.