Could Avian Flu lead to the next pandemic?

Avian Flu is not a new disease, but its rapid spread in recent years suggests that it’s now posing more of a threat than ever before.

What is Avian Flu?

Avian Influenza (commonly known as “Avian Flu” or “Bird Flu”) is an infectious disease which affects the respiratory, digestive and/or nervous system of birds. In some cases, it can be transmitted to humans and other animals.

Like other viruses such as swine flu and human flu, Avian Flu is caused by strains of influenza. There are lots of different strains of the virus, but according to the NHS website, the four that have caused concern in recent years are:

Although these strains don’t infect people easily, there have been instances around the world where they have spread to humans, and led, in some rare cases, to human fatalities.

What is the history of Avian Flu?

There are reports of avian-related illnesses (referred to as “fowl plague”) as early as the 1870s, however it was not until 1918 that the virus gained worldwide attention, under the misnomer ‘Spanish Flu’. Caused by a virus with genes of avian origin, the 1918 influenza pandemic infected an estimated 500 million people, with deaths estimated from between 17 and 50 million, and possibly as high as 100 million, making it one of the deadliest pandemics in history.

How has Avian Flu changed over time?

For years, Avian Flu viruses have been occurring naturally amongst wild aquatic birds such as waterfowl (ducks, geese, swans etc.) and shorebirds. In recent times, genetic mutations of Avian Flu have allowed the disease to replicate more frequently and be transmitted more rapidly, now posing a threat to domestic birds as well.

The H5N1 strain of Avian Flu is highly infectious to domestic birds and was discovered in 1996, originating from geese being kept for commercial purposes in Asia. After being transmitted to wild birds, the disease was then spread throughout Europe and Africa, resulting in high numbers of deaths within both wild and domestic individuals.

In 2021, workers on a bird farm in Russia tested positive for H5N8 – the first time this strain has been detected in humans. 2022 saw a highly infectious variant of H5N1 resulting in Europe’s worst bird flu season, as well as the first reported case of a human found to be infected with the strain in the UK.

Does Avian Flu pose a threat to humans?

Given that the last time an influenza of this type was transferred to humans, it caused the deadliest pandemic in history, experts are understandably concerned that it could happen again. At present, Avian Flu only seems to be passed from birds to humans, however, with the virus showing no signs of slowing, it may only take a few mutations for it to become transmissible from human to human.

As well as the high transmission rates, the H5N1 strain of Avian Flu has been found by the World Health Organisation to have a fatality rate of 60% in humans. The seasonal flu vaccine doesn’t protect against avian flu, so there is currently no vaccine for this virus.

What is the link between farming and Avian Flu?

In his book, ‘How to Survive a Pandemic’, physician Michael Greger argues that many viruses are the result of humans interfering with the way animals live, and farming is no different.

Intensive farm settings provide the perfect conditions for viruses such as Avian Flu to thrive, spread, and mutate into highly pathogenic strains. 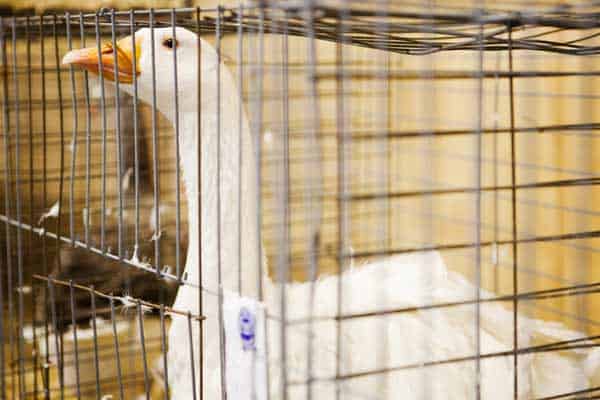 There are several ways that intensive farming practices are helping to drive the spread of the virus:

Between October 2021 and May 2022 alone, there were 2,398 outbreaks of Avian Flu in Europe, over half of which were due to the movement of infected birds to other farms. If the transportation of birds is prevented while Avian Flu is prevalent, this has the potential to reduce transmission and the number of individuals which are destined to be culled.

“Keeping massive numbers of poultry on intensive farms worldwide is now coming back to bite us. The solution lies in bringing an end to factory farming and the conditions that can act as a disease pressure cooker, instead rearing animals using humane and sustainable farming methods.”

– 2007 report by Compassion in World Farming

How is Avian Flu dealt with in farming?

If Avian Flu is detected within a collection of birds, all of the surviving individuals will be culled to reduce the spread to other flocks. In the relatively short period of eight months between October 2021 and May 2022, an astounding 77 million birds were culled in an attempt to reduce the spread of the disease.

Despite these culls, 400,000 non-poultry birds, including wild individuals, still died during this time. This is double the number of deaths that occurred during the outbreak from 2016 to 2017, demonstrating the increased pressure being put on wildlife as well as farmed animals, by the virus. These high numbers of outbreaks have been linked to the intensive farming of animals, causing these unnecessary deaths.

What is an Avian Flu Housing Measure?

When Avian Flu is detected in the UK, the government sometimes introduces mandatory housing measures, which apply to keepers of poultry and captive birds. One of the implemented regulations is to keep them away from the wild birds which may be carrying the disease. This means that captive birds must be kept undercover for potentially several months at a time, even if they are free-range or organic. Within some settings, such as farms, this can have significant welfare implications on those birds who would normally have outdoor access – reducing the space, natural light and ability to perform normal behaviours. Many indoor areas are only designed for short periods of time overnight and not suitable for long term housing.

What does this mean for free-range or organic farms?

Alongside issues with short-term housing for farmed poultry, there can be long-term repercussions for these individuals too. The poultry that are supposed to be raised in a free-range environment cannot be labelled as such when their products are being sold during the Avian Flu housing restrictions. Free-range poultry is more expensive to keep and therefore the products are sold at a higher price. As Avian Flu restrictions become more frequent, farmers may choose to move towards intensive and cheaper methods of raising these birds. This is due to only being able to sell higher welfare products for short periods of time and is therefore not as cost-effective.

Farmers have also commented that they are having to cut costs due to the expenses associated with keeping poultry. The culling of flocks and restrictions which are put in place will also reduce the profits from higher-welfare farming, resulting in cheaper measures being put in place and negatively impacting the welfare standards provided.

Avian Flu has significant negative impacts on both the lives of wild and captive birds, causing the death of thousands, even millions of individuals. There are ways that everyone can help stop the spread of Avian Flu even if they do not own birds.

As an individual, you can do your bit for animals, humankind and the planet by opting for a vegan diet and lifestyle where possible. One of the best ways we, as humans, can help prevent the spread of Avian Flu and the threat of another pandemic, is to put an end to intensive farming and the exploitation of animals.

“Farming is central to the threat posed by future pandemics, with all the major outbreaks of modern times tracing their zoonotic origins back to human exploitation of animals” – Surge Activism

The life of a laying hen